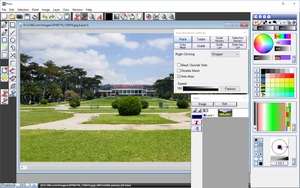 “A popular graphics editor translated from Japanese to English”

A review of Pixia by Felix Cheng

Unlike many traditional image editors, Pixia is a graphics editor designed especially for those with creative talent in comics. This program is interesting because it is one of the first image editors which focuses on this one talent.

Pixia includes many different features and can apply a small collection of different filters on the frames you're working on.

Like most image editors today, Pixia sports a traditional interface which can be compared to other painting and graphics editing software, though underneath it is certainly unique.

The editor supports layers, paths, textures, patterns and can work with many different types of files. You can even turn your 'normal' digital photographs into something that looks more like a comic you might read in the Sunday morning newspaper.

Thanks to the overall growing popularity of this app, there are many web sites and communities posting the latest in tutorial guides. The publisher's site also provides a link to the manual if you need help or documentation.

Overall, Pixia is an intuitive program by some talented Japanese developers. Note: If you're having issues running this program under Windows 7 or Windows 8, try running it as administrator.

Pixia is software which can apply special effects to a picture.

This download is licensed as freeware for the Windows (32-bit and 64-bit) operating system on a laptop or desktop PC from graphics editors without restrictions. Pixia 6.5.0 is available to all software users as a free download for Windows 10 PCs but also without a hitch on Windows 7 and Windows 8.

Compatibility with this painting creator software may vary, but will generally run fine under Microsoft Windows 10, Windows 8, Windows 8.1, Windows 7, Windows Vista and Windows XP on either a 32-bit or 64-bit setup. A separate x64 version of Pixia may be available from Pixia.